Thank you for visiting.  I should start with an explanation as to why, having lived through twelve (so far) U. S. Presidents I would want to now take a plunge into the blog pool during this era of my checkered career.  Quite honestly, I have too much time on my hands.  I’m firmly convinced that once you receive your AARP card in the mail, HR departments everywhere are alerted to the fact that incipient senescence  may make you a hiring risk.  For over 40 years my career has been advertising.  It has provided more thrills than swimming with sharks while cleaning a 400 lb tuna.  It is an industry that tries to win votes…for its clients’ products.  It has been an adventure.  Someone once said to me, “Always remember, at the end of the day we’re just trying to sell soap.”  Hence the blog’s title. These are my somewhat clouded reminiscences.  I promise not to name names…if possible.

After I decided to change majors in college, I was bouncing around looking for a course of study that would provide me with financial security for the rest of my life.  I found the answer while working as a counselor at a summer camp in Michigan.  I noticed that the father of two of the campers would drop his sons off each year in a brand new car. During the summer of my career ennui, I asked him why he always had a new car each time he drove up to the camp.  He told me that he was a management supervisor (whatever that was) at an ad agency in Detroit that handled the Pontiac account.  Each year when the new cars came out, the company gave him a car to use.

This was incredible!!!!  You had a job like Darrin Stephens AND you got a new car every year?!?!?  Sign me up!  I later learned that you could tell what year an episode of Bewitched was filmed by looking at the model year of the Chevrolet parked in the driveway. 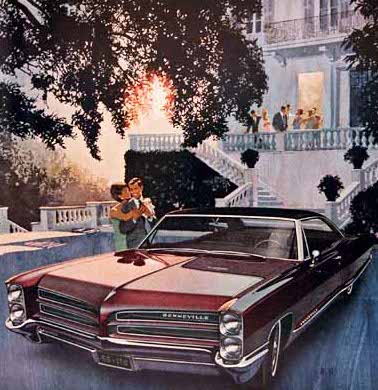 Chevy gave cars to the show each year to showcase the current models.  It was literally raining free cars.

The decision was made.  I became an advertising major at Michigan State University.  My friend on the Pontiac account told me to look him up when I graduated.  I very blithely took that as, “Tom, when you graduate, there’s a job and a FREE CAR waiting for you.”

Next:  “I got your multiple-linear regression analysis right here!”