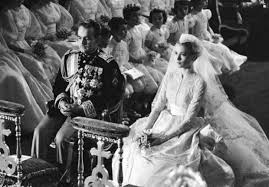 Now that I was one of Campbell-Ewald’s “Young Account Men,” things began to move swiftly.  My fiancée and I set April 15, 1972 as our wedding date.  I figured that if I got married on Income Tax Day, I’d never forget my wedding anniversary.  Now that I was able to remove my training program beanie, I was able to “mainstream.” I was being invited to important meetings, I was meeting clients, I was going to these wonderful things called media parties, and I was walking with the swagger of someone who thought he was set for life.  One of my responsibilities as the Assistant to the Director of Field Operations was to help determine the economic course of Chevrolet’s future. Each Campbell-Ewald field office had to submit a weekly report as to how things were going in their particular region; sales trends, competitive media buys, dealer comments, newspaper stories.  They were submitted to me each Monday. My job was to “edit out” anything that might reflect badly on the client’s success as these reports were then sent on to Chevrolet.  The New York Times wrote a nice story on the Datsun B-210?  Can’t have that.  The aluminum block engines in the Vega were blowing up all over California because they couldn’t handle the stricter pollution controls required out there?  OK, nobody needs to hear bad news like that. The “Drive A Winner Derby” promotion in the Midwest Region was a flop? Nope, nope, nope.  Definitely can’t have that!  Every day the field guys would call in to schmooze, anxious to find out what was going on in the Mother Ship.  We were a “Band of Brothers.”

After about six weeks of putting my imprimatur on weekly reports, I was called into the office of the Regional Account Executive for the North Central Region. Because the Chevy regional office for North Central was in Detroit, the Campbell-Ewald rep, Jim Muir, was stationed in Detroit.  In fact, his office was right next to mine.  Jim had been a great tutor on the ins and outs of the job.  Jim asked me to sit down as he closed the door.  “Tom, I’m going retail.”  This was not the same as “going ballistic” or “going commando.”  This meant that he was going to go to work for a dealership. It happened a lot to the field guys.  He continued, “I start in two weeks with Buff Whelan Chevrolet in Sterling Heights, and I’m recommending to management here that you take my place.”  I was shocked!  I was finally going to be a Field Guy! But….I really wasn’t going to be my own boss as I was still in the GM Building, I was going to be calling on exotic locations like Flint, Cleveland, and Buffalo, and it was snowing outside.  Wait, wait!  I was to inherit Jim’s Chevy Impala company car.  I had arrived!!!  I was now getting free cars.

I was now Regional Account Executive/North Central.  I had a friend drive me in to work that day.  I would be driving home in my free car.  The 1972 Impala was parked with the rest of the agency free cars in the parking garage of the Fisher Building.  The Fisher Building, designed by the same fellow who did the GM Bldg, went up in 1927.  It featured an 11 story garage.  My spot was on 11.  Cars keys in hand, I arrived at my free car.  It was beautiful, with a hood large enough for Tom Turner to land one of his Tomcat fighters without a tail hook.  I placed myself into the captain’s chair and gave the order to the Impala’s engine room to “Engage.”  We slowly left the docking bay and approached the first down 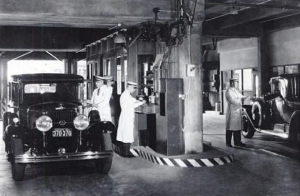 ramp.  This is when two startling realities enveloped me: this garage was built in 1927, my “USS Enterprise Impala” in 1972; and, it was Winter and the car had studded snow tires on it.  The garage floor was concrete with that waxy coating that prevents oil stains.  My 4200 lb aircraft carrier was on ice skates!! Also, my Impala had almost 2 feet more wheelbase than a 1927 Chevy,  I was about to find out just what that meant as I came to the first down ramp.  My effort at a hard right left me wedged in the ramp.  I put the car in reverse to try again.  The whir of the metal spikes that prohibited the rubber tire tread from touching the ground was deafening.  I put the car into “Park” while I tried to turn the wheel harder to the left, hoping to free myself.  My terror was tempered by a loud honk.  Cars were beginning to stack up behind me!  I put the car in “Drive” and touched the gas, all the while struggling with the steering wheel.  I began to slide down the ramp…sideways.  At least I was facing the right direction when I got to the 10th floor.  And now, on the next attempt I knew to start with a wider arc.  I nailed it! I was pointing straight down toward the 9th floor.  I tapped the gas, smug in my knowledge that I had shown those idiots backed up behind me that I wasn’t some rookie to free cars.  I suddenly realized that I was sliding again, and gaining speed. I hit the brakes.  No luck.  Twelve feet 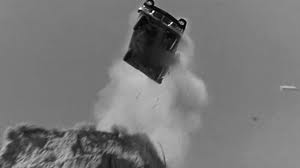 from the bottom of the ramp was a wall.  This wall was the outside wall to the garage.  There was a window in it.  I was rocketing toward it.  Suddenly, I could see Mom and Dad, and old Muzza, my dog. There were Lynn and Chris from 5th grade. I was going home!!!  I could see the headline in that evening’s Detroit News: “Ad Guy on Chevy Hurtles To Death Out Of Fisher Building.”  It took me about three hours to get my free car out of the Fisher Garage.

On Wednesday, April 12, 1972, I was called to the Field Director’s office.  Gene Owens had left the agency to make some big bucks with a promotions company.  My new boss was Bob Milford, who had moved over from the Truck Account.  “Tom,” he began, “We have some great news.  You’re being promoted to the Midwest Region in Kansas City”  Hmmm, I thought, was there a hierarchy to the regions?  I was ecstatic. I had never been to Kansas City and I heard that they had some great BBQ.  “I accept!” I shouted.  “That’s great,” Bob said.  “Here’s the deal.  Ron Bleckmann (the current occupant of the seat) has just informed us that he’s leaving to join J. Walter Thompson on the Ford Account in Kansas City.  We had to terminate him immediately.” NOTE: this is pretty much standard in the ad biz.  If you go to another car account, they don’t want the client knowing they kept someone around.  “So,” Bob continued, ” Ron is gone as of today.  There’s an important Midwest Regional meeting out there

on Tuesday, so we’ll need you in Kansas City on Monday to get ready for it.”  There was one problem.  “Bob,” I said, “….Ummmmm. Do you mind if I get married first? Remember those vacation papers you signed letting me go on vacation from 4/14 to 4/24?  I’m getting married in Muskegon in three days, then we’re going on our honeymoon.” Bob’s wide-eyed stare told me that he’d forgotten.  “Tom, we really need you there.” “Bob, I’m a dead man if I take off the morning following the wedding.”  “Tom, let me talk to some people and see if we can’t reach a compromise.”  I wasn’t going to call my bride-to-be and worry her…yet.  Let’s see what they come up with.