Nothing takes the chill of a cold Memphis night out of your bones quicker than a glass or two of sour mash bourbon. I found a large booth in the hotel bar and started my de-icing process. Moose Krause and Steve Niehaus soon joined me. We discussed the game. I also informed them that as a staunch MSU Spartan, I shouldn’t be seen in public fraternizing with any Fighting Irish, let alone their Athletic Director and All-American Defenseman. But as a goodwill gesture, drinks would be on me. Well, on Chevrolet.

Moose had driven from South Bend to Cincinnati to pick Steve up at the Niehaus home, and then drove the two of them to Memphis. This was a trip of over 700 miles, and it took almost twelve hours to drive! Moose explained that he drove down to Cincinnati on 12/21, spent the night in a motel, then picked Steve up for the long drive to Memphis. I asked him why drive when we would have flown both of them. His response was, “I wanted to stop in and say ‘Hi’ to the Niehaus family. They’re really wonderful people.”

A few minutes later, we were joined by Miss America. Except now, she was Tawny Godin from Portland, Maine. “Where is Frau Blücher this evening?” I asked. Tawny said, “She went to bed. I’m free and clear for a while, but can’t stay out too late as we have adjoining rooms and she can tell when I get in.” The three guys in the booth then began to pepper her with Miss America questions that she’d probably been asked thousands of times before. I decided to change the subject. “Tawny, what do you think of this new comedy show on NBC called

Saturday Night Live?  Do you think it has a chance?” Before she had a chance to answer,we were joined by Jim Lampley.  Jim had been hired by ABC the previous year to become one of the first “sideline reporters.” ABC wanted to attract a younger demographic for the NCAA games.  They felt that having a young, attractive person giving quick reports from the sideline would perk things up a bit.  Jim’s youth and director Andy Sidaris’ “honey shots” of cheerleaders and women in the stands, had turned the football games into a ratings powerhouse. Little did I know at the time that 40% of the people sitting at the table with me that night would go on to become news anchors for TV stations in LA.  Tawny, as Tawny Little, for KABC and others, and Jim, on KCBS. He is now doing boxing on HBO. Moose Krause, who played football at Notre Dame under Knute Rockne, would be elected to the College Basketball Hall of Fame. Steve Niehaus was a consensus first string All-American pick in 1975. He would be the first person ever drafted by the Seattle Seahawks a few weeks later. Ironically, they chose him over Chuck Muncie. He was the 1976 NFL Rookie Defenseman of the Year, and holds the Seahawks record for most sacks in a single season.

Me? I was still trying to figure out how to get my free car back.

As the evening wore on, our ranks began to thin. Moose Krause was the first to fold. As he got up, he asked if he could speak to me for a moment. The two of us moved to a nearby empty booth. “Tom,” he said, ‘this is rather embarrassing. As you know, Steve and I drove down here. On the night of 12/21, I stayed in a motel outside of Cincinnati before picking Steve up at his parent’s house the next day.” Where was he going with this, I thought? Moose reached inside his suit coat pocket, pulled out a crumpled piece of paper, and handed it to me. “It’s the motel bill for the night I stayed in Cincinnati, he said. “Do you think I could get reimbursed for this? I paid for it out of my own pocket.” The bill was from a Motel 6 for $38.00. I didn’t have the heart to tell him that we’d spent $7800 flying the Cal Berkeley guys in.  “Of course we’ll reimburse you,” I said. Just send me an invoice

and I’ll be sure that it’s billed through on the job.” His eyes fell.  “How long do you thing that will take?” he asked. I knew where this was going. “Here, Moose, let me pay you now for it, and I’ll turn it in with my expenses.” I handed him $40. He bade me goodnight and told me to look him up on my next trip to Notre Dame.

Shortly after I got back to our booth, Miss America said that she’d better get back to her room before the clock struck twelve. We all stood and waved her off. A few minutes later, Jim Lampley excused himself. Steve Niehaus and I ordered more distilled corn by-product. Steve kept looking around furtively. “Did Coach Krause really go back to his room?” I assured him that he had. “Whew!” Steve said, as he pulled a rumpled pack of Winstons out of his hip pocket. “I thought he’d never leave.” The mangled cigarette was quickly lit, half of it disappearing as Steve inhaled. “You smoke?” I asked. “Like a chimney,” Steve said. “I was worried that my hands shaking would give it away. Coach Krause would kill me if he knew I smoked.” Interesting comment from a man whose Notre Dame playing days were over, and who was about to become a millionaire in the NFL. We talked for a while about our backgrounds and hobbies.

He mentioned that he’d attended Archbishop Moeller High School in Cincinnati. Moeller was a perennial football powerhouse, providing the NFL with a lot of players. One of their notable alums who didn’t go into the NFL is former football center John Boehner. Moeller was also a fertile recruiting field for…Notre Dame! A small light began to flicker on in my head. I asked Steve how he got the news about his Chevy scholarship award. He told me that Moose Krause called him with the news. “Did he tell you that we were willing to fly you to Memphis?” I asked.  Steve said that he had, but Moose told him that he 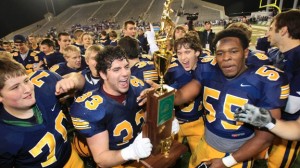 was “going to be in Cincinnati anyway” and that it would be easy for them to drive to Memphis together. That crafty old codger! He was going to Cincinnati anyway to recruit talent for Notre Dame, and I had helped him by subsidizing his trip!!  It’s as though I had made a direct contribution to their football fund. It has taken me almost 38 years to deal with this guilt and publicly admit it for the first time today.

Next: “What Do You Mean We Printed The Wrong MPG Numbers?”

2 thoughts on “Behind The Green Curtain”