One of the great things about being in the ad biz, in addition to the free cars, was the opportunity to get lots of free stuff and meet famous people who would act like you were actually someone who they would ever hang with.  One such event was the annual Time Inc. La Quinta Golf Tournament and Lupercalia. It was held every year at the La Quinta Golf Resort near Palm Springs. There’s no strong evidence to support my theory, but I believe that Time Inc. held the event every year to coincide with the ancient Roman fertility festival of Lupercalia. The Time Inc. event certainly had its own share of wine-sodden people running around naked. In addition 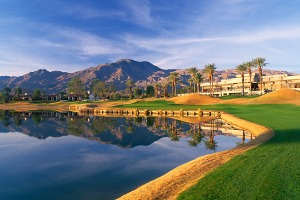 to the three days of golf, drinks, cigars, drinks, food, golf, drinks, all-night gin rummy games, and drinks, the event provided a special guest speaker who would appear at the Saturday night steak-fry and awards dinner. This is when I first realized that these rich and famous people would become my friends and stop by at my house for dinner.  Although none of them ever returned my calls.

One year, as dozens of sunburned ad people staggered their way, drinks in hand, to the banquet room, we were informed that we could only enter through one door, that door lined with men in dark suits and speaking into their cufflinks. A large metal detector had been installed 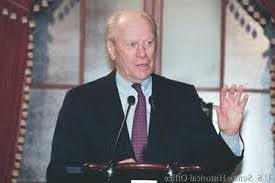 in the doorway. I correctly guessed that the speaker tonight wasn’t going to be Pee Wee Herman. In fact, it was former President Gerald Ford. We were in a smallish room, about eight tables of ten people set in two rows of four in front of the podium. Stationed on either side of each of the rows of tables was a Secret Service agent. President Ford needed and deserved protection.  Squeaky Fromme and Sara Jane Moore had seen to that. It must be an awful feeling knowing that there were crazies out there who wished you harm.

We were all just finishing our desserts, gigantic slabs of key lime pie, when President Ford was introduced. I’m sure that he was an honorable man who ran our country during a very tough time, but when he started talking about his days as a football player at the University of Michigan, and the glories of Wolverine football, I as a Michigan State Spartan, began to tune out. It was if Ford was speaking Portuguese in a very low whisper…I wasn’t interested, and couldn’t hear it anyway.  My mind started to wander. This was a small room. There were only four Secret Service agents. What if some crazy person wanted to hit the former President with a still untouched piece of key lime pie? I

Wow!!  This is too easy. I cased the room again. Everyone was listening to President Ford. The Secret Service agents were all scanning the room for crazy people. Good luck with that! The four agents had stone stares as they stood positioned too far away to stop a pie. Wait! There were only three agents now. Probably the fourth agent went outside for a smoke. Suddenly, I panicked. What if they had devices that could read your mind? I should have worn my aluminum foil helmet to the steak fry. It was then that a feeling of dread and utter despair overcame me. The fourth agent wasn’t outside.  He was standing behind me!!!!! I slowly turned in my

seat to find the fly of a man’s pair of trousers a foot away from my face. I slowly looked up, to be met by agent #4’s eyes looking down on me. “Do we have a problem here, Sir?” I was immediately thankful that I’d worn a dark pair of pants to the dinner.  “Uh, no. Why?” I asked. He squatted next to me. “Well, you see, everyone in the room is watching the President. We noticed that you were busy looking around the room. Everything OK here?”  I told him, as my throat began to close, “I’m sorry. I never voted for the guy…and I went to Michigan State.” The agent laughed, “I hear you.” He rose and gave a subtle signal to the other three that I wasn’t crazy.

Each year, after the guest speaker was done, we all retired to a large banquet room for an evening of drinks, card playing, drinks, cigars, food, drinks, and drinks. The game of choice for 90% of the group was high stakes gin rummy. Another 7% (those who had their names on ad agency front doors) would play even higher stakes poker. Three of us, Bill Hagelstein, Mike Parker , and I would rather go back to our rooms and flush $200 down the toilet.  We weren’t good at gin rummy, and this saved us a lot of time. We were fans of the most cerebral, nuanced,

sophisticated, and exciting card game ever played: Euchre! The three of us would play a three-handed version of the game, unable to find a fourth. We play ferociously until 2 or 3 in the morning, and then tally up. The biggest loser of the night could be on the hook for maybe $8. And so it was one year when columnist/humorist Art Buchwald was the speaker.

After his hilarious talk, Art followed us all into the Hall of Sorrows to kill some time. He strolled between tables, watching the giants of the ad industry gamble away their children’s inheritances.  I’m sure he was gathering information for a book or column. He walked by the three

naïfs playing a game that was definitely not gin rummy. He pulled his cigar from his mouth and shouted, “You guys are playing Euchre! Can I join you.” “Of course,” we said. Art immediately sat down in the empty fourth chair. After introductions, Art told us that he loved playing the game as a kid growing up in New York, and thought that nobody played it any longer. For the next four hours we were regaled with incredible stories and cigar smoke. Actually, all of us were smoking cigars, gifts from our new best buddy Art. Finally, he said, “Well, my friends, what’s the damage? I should go.” I spent the next minute slowly tallying the score. Art already knew that he and Bill had won.  I finally was able to announce, “OK. Bill and Art, you won $24.” Art was dumbstruck. “$24?” he croaked. I said, “Well, actually that’s split between the two of you, so that’s $12 apiece.” Mike and I were already fishing our losses out of our pockets when Art exploded with feigned shock and dismay. “I just spent over four hours with you f#&*ing mopes and all I have to show for it is 24 f#&*ing dollars? He laughed and shook our hands as he walked over to join the poker table with the guys who had their names on their agency front doors. As he scuttled away, I shouted after him, “Art, call me. I want to know if we’re still on for dinner at my house next week.”

Next: Rolling Coconuts And Football

4 thoughts on “Hanging With The Rich And Famous”