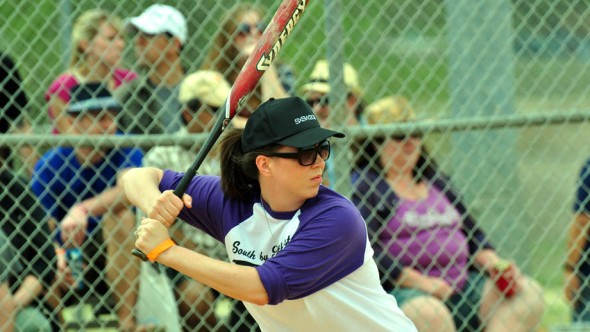 Advertising is stressful, competitive, daunting, draining, exciting, and stimulating. It also tests the limits of your endurance, and is always just a hair’s breadth away from erupting into violence. That’s why Foote, Cone & Belding/Honig had a co-ed softball team. We wanted to carry these life shortening characteristics into our evenings and weekends. We took it seriously.  This was not your fluffy “oops, let’s have a do-over” type of softball.  This was “take-no-prisoners” softball. We were L.A. advertising’s softball equivalent to Burt Reynolds’ convict team in The Longest Yard. Our 3rd baseman had been a star on the UCLA women’s softball team. Her throws to 1st base were measured in nano-seconds. Our left fielder carried, along with his glove, a six-pack of Pabst into left field with him every inning. Our 2nd baseman was able to schedule his psychotherapy sessions around our games and

practices. And, like Pavlov’s dogs getting their treats for positive behaviors, we would retire to Sloan’s on Melrose to fuel our libidos. Alas, like the Tail O’the Cock, Sloan’s is long gone; given over to those who cater to glitterati and illiterati.

The FCB team was a juggernaut of raging estrogen and testosterone. We would “juice” with our own proprietary concoction, testrogen,before each game. It was now 1980.  We were in the playoffs.  Our next opponent was William Esty, the agency for Datsun. We knew that no quarter would be given or sought. Nerves were on edge. We were all wound tighter than $5 Sears ukeleles. The game was close. The crowd was frenzied. then, it happened……. The Esty batter hit a slow grounder to 3rd base. Our star 3rd baseman charged it, and with one motion, picked it up with her hand and fired it to 1st base. Unfortunately, Patty Dryer, our crack 1st baseman, had her foot on the foul territory side of the bag, rather than on the 2nd base side. Because of this, her right leg

and hip were directly over the base. The ball and the runner, who had his head down running as fast as he could to beat the throw, reached Patty at the same time. Because half of her body was across the base, the runner hit her like an Amtrak train hitting a small goat. She was out cold before she hit the ground.  The ball caromed off into right field.

Time was immediately called. Patty was carried off of the field and put underneath a shade tree. Her husband, a beefy ex-marine who ran his own collection agency, charged out of the stands and went after the Esty runner. It took five of us to drag Patty’s husband to the ground and explain that it was an accident.  The Esty runner was one of the nicest guys in LA advertising, and he didn’t mean it.  The collision was Patty’s fault. Cooler heads prevailed. For a while.

We were in the second to last inning, and had the game well in hand, when it became payback time.  Just like in Major League Baseball, “you hurt one of ours, we’ll hurt one of yours,” came into play. Except there was only one person on our team who felt this way…our left fielder who had already consumed six innings of Pabst six packs. He had advanced to 3rd base, when one of our folks hit a fly ball to left.  The Esty fielder caught it for the second out. Our guy on third base began to slowly walk down the line toward home plate, yelling at the left fielder to throw the ball to the catcher to tag him out. Oh no! He was going to take out the catcher! We all yelled at him to go back to third. The poor catcher, 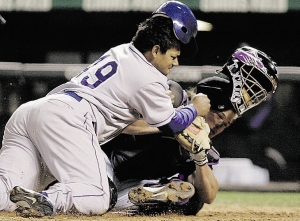 who was only playing that position because he’d hurt his leg and couldn’t run, knew what was coming. He slowly moved to the side of home plate. The left fielder took the bait, threw the ball to the catcher, and our guy went into overdrive, going out of the base path to take out the catcher, who by now was fleeing toward the dugout. The collision set off car alarms for three square miles.

And just like the true sportsmen and sportswomen we all were, the benches emptied. Lots of pushing, shoving, groping, and cursing. We felt bad, because the Esty folks really hadn’t done anything wrong. But, true to our warrior code, 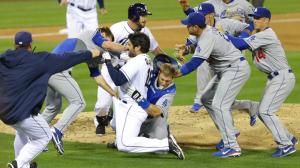 we had to watch each other’s backs. After a few minutes of jostling and bellowing, enough to satisfy the honor code, we all retired to our respective benches…except for our left fielder. He had been kicked out of the game.  This didn’t bother him too much, as he was able to make a quick beer run. We won the game and went on to win the West Coast Championship. After the game, we retired to Sloan’s to lie to each other about how great our advertising was. Patty was there, with her red badge of courage bandage over her eye. The Esty guy bought her drinks all night.

A few weeks later, the agency folks were in Las Vegas for the annual Mazda dealer show. This was going to be the first time the Mazda dealers would be seeing the new Mazda RX-7, the car that was to save the franchise. We were going to use a new, at that time, technology whereby the car would be revealed traveling through a tunnel of laser light out over the audience. This was going to be huge, the most expensive new model reveal in Mazda history. The night before the show saw us all trying to get everything ready. Top executives from Toyo Kogyo in Japan would be in attendance. It was now 1:00 AM and we noticed that the electricians rigging the lasers had stopped working and were sitting around smoking. I asked them why they had stopped working.  They gave me another life lesson.  “See that pipe up near the ceiling? We have to pass a cable over it.”   “So?” I asked. “Well, you see, we’re electricians, not plumbers.  That pipe carries water for the sprinkler system.  We can’t touch it. We’ve put out a call for a plumber.” Two agonizing hours later, a plumber walked in.  He was getting triple time as this was an “emergency” call. The plumber and an electrician rode a scissor-lift to the ceiling. The electrician handed the cable to the plumber, the plumber laid it over the pipe, and Violá, everything was back on schedule. The reveal went off without a hitch, and everyone was very happy. Including the plumber.

Next: I Hang Out With Supermodels!