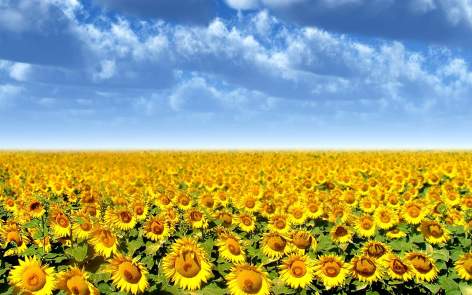 A hot, summer sun rose over southwest Kansas that August morning.  The ghosts of Helen Crump, Dorothy Gale, Alf Landon, Carrie Nation, Wyatt Earp, and Dwight Eisenhower faded with the dew on the sunflower petals into the ashes of the dawn.  I was visiting the Wichita Zone for their annual Salesperson’s Sales Jamboree Awards.  Dealers who won sales contests were sent, with their wives, to Athens, or Paris, or Tahiti.  Salesmen in the state of Kansas and northern Oklahoma were sent to Wichita for a day of beer-soaked fun, followed by an awards dinner. Sales Jamboree Awards Headquarters was an interesting place called The Diamond Inn, located near the Wichita Airport.  Wichita, Kansas…home of Pizza Hut and Cessna.  I’ve tried both.  Until that time, I preferred Little Caesar’s.  Mainly because I grew up near the original Little Caesar’s Pizza Treat in neighboring Garden City, MI.  This preference lasted until I had my first Ray’s Famous in NYC.

Sixty salesmen (quelle surprise, no women) gathered for the kickoff breakfast.  Scrambled eggs, hash browns, grits, and steak.  They also served an endless supply of bloody marys, scewdrivers, and mimosas.  Since “real men don’t drink mimosas,” I had them all to myself.  The serving of liquor at the breakfast served several purposes:

After the breakfast, we split into two groups.  Golfers were transported to Endless Plains Country Club.  The course was proud of the fact that there were no trees on the course. 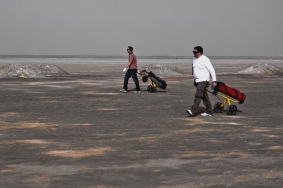 There weren’t any bushes either.  The sand traps were thinly disguised dry washes left over from when the Chisholm Trail ran across the course.  If your ball landed next to a cattle skull, you were allowed a free drop. The second group was taken to the Jayhawk Bowl-O-Rama.  Chevrolet had bought the place out for the day, and had an open tab at the bar. Nothing gets one ready for six hours of bowling like a Jack and Coke.  The outside temperature was now approaching that of the surface of Mercury.  As much as I would have liked to tempt fate by driving golf balls across 7200 yards of dried earth, I opted for the air-conditioned sedentary prospects of the bowling alley.

Detroit used to have a great television program called “Bowling for Dollars.”  I could have filmed the pilot for a new show, “Bowling for Electrolytes.”  If one begins drinking at 8:00 AM, and has ingested at least twelve drinks  by noon, the day can only go downhill.  At least the golfers can sweat it off, I thought.  I was wrong.  The golf event had turned into a death march.  Each tee box had a full bar, adding to the dehydration that was running rampant through the golfers.  By 1:00, the bowlers had given up any sense of decorum. 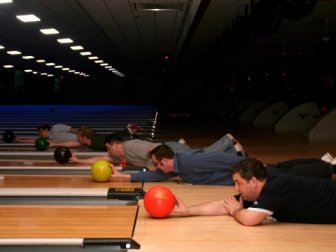 Bowlers on several lanes had turned the day into a shot put event, with 16 pound balls dropping like nightmarish hailstones. Not just on the alley, but at the front desk, the cocktail lounge, the ladies room, and the day care center next door. Others, in a prescient nod to planking, were trying to fire the salesmen who had passed out down the alley toward the pins. Others lined the balls up at the foul line, and then pushed them down the lane with their noses.

We still had a BBQ dinner and awards ceremony to get through.  Once the salesmen decided to start playing dodgeball with bowling balls, I excused myself, saying that I had to go “check on dinner.”  I took a cab back to the hotel.  The area around the pool had been magically transformed into a Hawaiian paradise.  In the middle of the pool there was a styrofoam island, complete with miniature palm trees, bird of paradise plants, and little thatched huts. I met up with Charlie Lopez, the Assistant Zone Manager, and the man in charge of the evening’s Bacchanalia.  So far, everything was in order.  The chef had been roasting a side of beef over a large charcoal fire.  Unfortunately, nobody noticed that the chef had passed out from too many vodka and Dr. Peppers, and the fire had gone out.  In a room just off of the pool area, the zone had set up a GM Mini-

Theatre. The Mini- Theatre was a valiant attempt to bring A-V technology into GM dealerships.  The dealer had to buy the device which sat atop a kiosk.  Each GM division produced Super 8 film cartridges that fit into the theatre, projecting product information  onto a small screen at the top of the kiosk.  The thought was that people, who didn’t want to talk to a salesman, could go over to the kiosk and slap in a video from a library of cartridges.  GM dealers resisted the concept because they didn’t want their salesmen sending people away to watch a grainy Super 8mm film.  The Wichita Zone set one up, complete with a full library of cartridges, hoping that the dealers would be driven into a sales frenzy and demand that the dealership sign up for the program. Someone made LOTS of money off of this.

The buses returned from the golf course and bowling alley, vomiting their contents into the hotel lobby.  Most of the salesmen made straight to the four open bars around the pool.  Realizing that the BBQ wasn’t ready, the command decision was made to let everyone keep drinking. The presence of an operational Mini-Theatre just off the pool area was announced.  Charlie and I were slicing huge slabs of raw beef off of the spit, and laying it directly on the grill to cook it.  Everyone breathed a sigh of relief when they saw 90% of the salesmen trying to jam into the Mini-Theatre room.  Who knew that a video about the Cosworth engine could be so appealing?  I went over to get “retail input,” as this would be good filler for my weekly report back to Detroit.  As I stood on my toes to see the Chevy film, I was surprised to see that the film in the cartridge now playing was a morality play about a poor pizza delivery man who, when he arrives at his destination, discovers that the two scantily-clad women at the address don’t have any money to pay for the pizza.  A barter discussion ensues, where the women discover a method of paying for the pizza without having to use money.  The delivery man agrees, and the film proceeds to show the entrepreneurial system in action.  I was proud to be an American!  GM technology at work.

The food was finally ready.  The salesmen were pushed to their seats with cattle prods and tasers.  After dinner, the awards were presented.  Those who couldn’t walk up to the stage sent a surrogate.  It was now time for the evening’s entertainment. I’m sure, at the time, having hula dancers close the day’s frivolity seemed like a good idea…in a normal world.  Two things shattered this notion:

The recorded music started.  The primal drum beats beat against dulled skulls.  Mrs. Torgelson’s troupe, made up entirely of already terrified pre-pubescent young girls shimmied their way onto the stage.  Dressed in grass skirts and coconut shells, they unwittingly threw gasoline onto the pent-up firestorm.  Immediately, the puerile jokes about “Hey, how 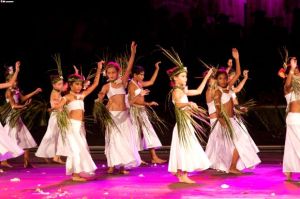 ’bout a lei?” started.  Chairs and tables were overturned as the mob approached the stage.  The first dance number had finished.  Mrs. Torgelson had jumped in front of the dance troupe.  Many of the girls were running toward the back of the stage, and out into the night. The music for the second number started.  The drunken mob surged. Just then, a Deus ex Machina appeared. Charlie Lopez entered the stage wearing boxer shorts, a grass skirt, and a smile.  He turned to Mrs. Torgelson and told her to grab the girls and “Run for your lives.”  The mob didn’t notice their departure, their eyes were all riveted on a Chevrolet executive shimmying around the stage.  Charlie gave it his all. When the bread rolls started pelting him, he threw them back.  Other Chevrolet zone staff started pelting the salesmen.  I must admit, it was quite satisfying nailing Earl Bob Haney, from Witless Chevrolet in Dodge City, right between the eyes with a stale bread roll.

The next morning, on my way to check out, I had to pass the pool area. The clean-up after Woodstock probably took less time. The large styrofoam island was nowhere to be seen.  There were, however, plenty of shoes, shirts, bowling balls, and boxer shorts.  When I got to the lobby, I saw Charlie Lopez.  “Charlie, you saved those girls last night.”  He smiled and said, “Sometimes you have to do what you have to do.” Just then, a VERY irate hotel manager came out from his office. “Mr. Lopez,” he croaked, “we’ve found the island.  The maids were cleaning room 227 when they found it.  They also found two naked men sleeping on top of it.  Apparently, they both had ‘their way’ with it several times last night.  You’re going to have to pay for this!”  Charlie let out a large sigh. “Sir, Chevrolet will pay for all the damage.”  As we walked to the parking lot, Charlie turned to me and said, “Well, Tom.  That was a pretty successful sales event.”

Welcome to the trenches!

Next;  My First Field Meeting

4 thoughts on ““Sir, Chevrolet Will Pay For All The Damage.””