The bomb had been dropped. I was being pulled back to Detroit. It was certainly the right thing to do as a career move. I was now “mainstream.” Close to the beating heart of GM. But, as a twenty-eight year old advertising naif, it was still hard to give up:

When I returned from the Field Meeting, Bob Albright and I started “Tom’s Farewell Tour.”  We visited the San Diego and LA Zone offices as well as the key dealers throughout the region. Most of the people we met asked, “Are you crazy?  Why are you leaving Southern California to go back to Detroit and work in the GM Building?” They all laughed when I said, “I had no choice.”  They thought I was kidding.  I wasn’t.  I felt like the condemned KGB prisoner.  Not only is he going to take one in the back of the head, his family is forced to buy the bullets. The packers packed, the movers moved, we were on our way back to Detroit.  As our neighbors tearfully waved goodbye, I announced, “I shall return.” We’d decided

that we’d drive back, figuring that we didn’t want to sit waiting for our furniture to arrive at our new house in Detroit. The new 55 MPH speed limit had been enacted for travel on U.S. Interstates. Being a law-abiding citizen, I told my new boss that I couldn’t drive over 55 MPH. So driving for eight hours would bring us 400+ miles a day closer to the GM Building. It’s 2,281.4 miles from LA to Detroit. The math dictated that I take 5.5 days to make the drive. The irony was not lost on me, I was going to be able to see the U.S.A. in my Chevrolet! I had made reservations for lodging along our way. We would drive to Las Vegas, then a short jump to St. George, Utah,  then to Grand Junction, Colorado, then Kansas City,  MO., on to Indianapolis, then into Detroit. Some stops were more than a day’s drive, but we were also sightseeing. I had everything planned down to the nth degree.  Except for one, teeny, tiny problem.  I would be driving across the country in La Bestia, my Chevy Monza with the 5.7 liter V-8 monster engine that was cooled by a tiny Vega-sized radiator. We left LA on a Monday morning, headed for Las Vegas. By the time we got Victorville, in the Mojave Desert, I noticed that the temperature gauge was going up. Determined to press on regardless through the blistering nothingness of the Mojave, I was only marginally concerned when the needle was firmly planted in the red zone of the temperature gauge. I was moved to somewhat concerned status when I saw steam coming out from under the hood. I arrived at critically concerned when the car stalled and

we coasted on to the shoulder of I-15. When it was safe, I opened the radiator cap and saw a bone-dry radiator. It was 109 in the desert that day, and the temperature in the passenger seat was rising even past that. After thirty minutes or so, a California Highway Patrol car pulled up behind us. After explaining my problem, he looked under the hood and laughed. “Buddy, when you dropped this monster engine into this car, you forgot to put in a radiator that can cool it. I’m surprised you got this far. Where are you headed?” When I told him, he slowly shook his head. He informed me that my car wouldn’t make it through the heat.  I said that I had to be in Detroit in five and a 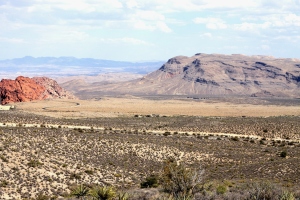 half days to become part of the Chevy Account Team. Surprisingly, he was unimpressed. We worked out a plan. He would fill my radiator with water.  I was to top the radiator off every sixty miles. I was only to drive at night to avoid the blistering heat of the day.  I was to drive with the a/c off! Already, my passenger was making plans to take a bus back to LA. We limped into Las Vegas at 10:45 PM. The heat wave in the Western U.S. was expected to last for another four days.

We decided to leave Las Vegas for St. George at 4:00 AM. The temperature had plummeted to 80 degrees.  Cool enough to drive without the a/c. There’s not much to see in the Nevada desert, there’s even less at night. We arrived in St. George in time for breakfast. Not quite ready to go to bed at 9 in the morning, we visited the Brigham Young Winter Home  and the Daughters of Utah Pioneer Museum.  Neither place appreciated my request for a cold beer.

We continued our nocturnal journey through Utah and Colorado.  Sleeping by day, enjoying the beautiful countryside by night. The only hitch came at the Loveland Pass.  This is where I-70 crosses the Continental Divide.  Gerald Ford had decided that he liked to vacation in Vail, about 38 miles west of the pass. In anticipation of the added traffic, I-70 was being widened on a stretch near the Eisenhower Tunnel, which cut through the pass. The elevation is about 12,000 feet. You can fool a tiny radiator into thinking it’s cool outside, but you can’t convince it that there’s air when there is none.  Traffic on I-70 was squeezed into one lane, and backed up for miles. Excavation equipment roared by our open windows. Steam began to wisp out from under the hood. A time and space warp enveloped the interior of my stalwart Chevy Monza. Hallucinations, screaming, flashes of lightning, curses shrieked in anger, talons ripping at flesh, and cries of banshees. We did, however, finally make it to Denver.

It was all downhill from Denver. In a good way, as we were on the downside of the Rockies. Kansas City and Indianapolis flew by.  We were now driving in daylight as we had the good fortune of being able to follow severe thunderstorms all the way to Michigan. We rolled into a Ramada Inn in Southfield, MI. This was just

a few miles from the house we’d purchased in the Beverly Hills area of Royal Oak. I needed some remembrance of California.Our furniture arrived two days later.  We were fortunate.  Only about 20% of our stuff was destroyed. Our schnauzer particularly loved the house as he could easily squeeze under the under the redwood fence in the back yard and run away, I was able to quickly meet a lot of my neighbors by picking up schnauzer dootie in their yards. Monday morning arrived.  I showered, shaved, and put on my best grey flannel suit. I grabbed my empty briefcase and drove down my street to Woodward Avenue…the femoral artery of Detroit. Turn right on Woodward. Turn right on Grand Blvd. Turn right into parking lot behind Fisher Bldg. Go into Fisher Bldg. Take the underground concourse to the GM Bldg. Go to the 4th Floor. I was now in the belly of the beast.

Next:  I Am Shown To My New Office