Ahhhhh, the magic of Hollywood! Where dreams become reality, and things aren’t quite what they seem. Chevy was still sponsoring the NBC Sunday Night Mystery Movie. McMillan & Wife, McCloud, and Columbo had become breakout hits. My brother was coming out from Detroit to visit me in Los Angeles. He asked if we might be able to go see a television show being shot.”Of course,” I said, being “connected” with NBC/Universal. “We’ll go watch them film an episode of Columbo. Fortunately for me, Columbo was shooting during my brother’s visit. I had our Head of Network call NBC to set it up. On the appointed day, my brother and I drove to the main gate at Universal. Reading from his clipboard, the guard said, “Yes, Mr. Cavanagh, that will be sound stage 19.  Here is your parking pass.” My brother was impressed. Enough, I hoped, to forgive me for mercilessly picking on him when we were little kids. We got to the sound stage and I introduced myself to the unit production manager who was expecting us. Two director’s chairs had been set up for us just to the right of the set.

The episode being shot was called “Swan Song.” The guest star for this episode was Johnny Cash.  He was playing a philandering country music televangelist (sorry for being redundant) named Tommy Brown.  Tommy’s wife (Ida Lupino) had caught him in flagrante with a choir member and was blackmailing him. Tommy, a pilot, comes up with a solution.  While flying with both ladies, he drugs them and then dons a parachute he’d stashed under his seat. He bails out and watches as the plane crashes and his problems disappear. Well, almost.  Detective Columbo gets suspicious.

The shot that day was to be a recording studio where Tommy was recording the spiritual “I Saw The Light.” The director was the late Nick Colasanto, who went on to play “Coach” on Cheers. In the script, Lt. Columbo walks in,

interrupts the session, and asks a few questions. My brother was ready to see the magic being made. For those of you who haven’t had the pleasure, watching a movie or episodic TV show being filmed is as exciting as anxiously watching fingernails grow. After forty minutes of playing with the lights, the camera was ready to roll. “Cue the music!” A pre-recorded tape of “I Saw The Light” began playing.  “Action!” The musicians pretended to be playing.  Johnny Cash started lip synching along. Columbo was supposed to enter through an EXIT door on the right side of the set. Where was Columbo? Peter Falk was patiently waiting on the other side of the door. A small red light next to him was his cue to enter the room. The light was burnt out. “Cut!!” Twenty minutes later the light was replaced.  “Action!” Everything cranked up again. This time Columbo made his entrance too soon. There was a short in the red light’s wiring that caused it to go off. “Cut!!” That was fixed. “Action!” Johnny Cash accidentally knocked over a music stand. “Cut!!” This time everything worked. “Cut!” “OK,” Nick said, “Johnny, I want you to look a little more nervous when Peter comes in.” “Action!!” We were up to Take 37 when my brother turned to me, “Uhh, is this all there is? How much of this will be in the show?” I told him maybe a minute. His face fell. The crew was breaking for lunch. “Is it OK if we go now?” he asked.

My brother, a husky fellow, walked out of the sound stage with me into the very bright, smog-diffused, Southern California sun. He was wearing a black suit, white shirt, and a thin black tie. He also was sporting a black moustache. He had 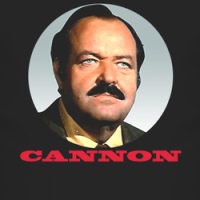 just put his sunglasses on when a Universal Studios Tour Tram started to roll by.  Everyone on the tram started screaming and waving at my brother. Had he left his fly open? I turned to look back at him. In the bright sun, and with the sunglasses, he was an exact replica of William Conrad who, at the time, had a hit detective drama on CBS called Cannon. “Quick,” I said, “start waving at them and give them a “thumbs-up” sign.  When he did, the solar flare of white light from over 80 Kodak Instamatic Flashcubes igniting simultaneously almost blinded us. As the tram pulled away, we heard shouts of “We love you Cannon!” Right now, my brother’s picture graces dozens of mantles throughout Iowa.

They say that the only true joy is a child’s joy.  The child has no idea that the happiness might end. So it was with my tenure as the Southern California Regional Account Executive. I hadn’t told anyone other than my wife, but, I had no intention of trying to get back to work for Campbell-Ewald in Detroit. During the summer of 1975, I met a fellow named Bob Albright.  Bob had worked for the LA office of Campbell-Ewald a number of years earlier.  He was now working  for the agency handling Toyota.  We became good friends. As much as we could, we would trade intel about the SoCal car biz.  He would stop by our office to see old friends, and pick me up for lunch. Our Summer Field Meeting was coming up in about a week when Bob showed up at my office. Hmmm.  I didn’t have a lunch scheduled. My secretary, Ilene, showed Bob into my office with the commanding view of Hollywood, and the LA Basin. Bob had a big smile on his face. We started with general chit-chat. Had I forgotten a meeting that we’d set? He asked, “When are you

heading back to Detroit?” I said, “Probably Sunday night.  The Field Meetings start bright and early Monday morning.” Bob laughed nervously. “No,” he said, “when are you moving back there?” “Bob, I have no intention of moving back to Detroit.” The smile had left his face. “But Tom, I’m here to take your place!”  “You’re here to do what????” I croaked. Perhaps it was my inability to get on my feet to strangle him, or the grotesque visage my face had become, or the frantic clutching at the stabbing pain in my chest, or maybe the fact that I was about to pass out. Bob quickly figured it out…I knew nothing of this. “Well, this is awkward,” he said.  “Maybe I’d better leave,” as he headed for the door. Ilene charged into my office, sobbing.  “You S.O.B.!!! You said that you’d tell me if you were ever going to leave.  Mr. Byrne was here for 17 years.  I’m not used to change like this.” Neither was I.

I pulled myself back into my chair and called Bill Fay.  Bill was the Director of Field Operations and one of those great guys who also had a keen prevarication radar. “Bill, what the HELL is going on?  Bob Albright was just here to tell me he’s the new LA Field Guy.” The earpiece on my phone exploded.  “Damn,” he said. “I’ll call you right back.” A ray of hope? A glint of light? A call from the governor at 11:59 PM? About ninety seconds later my phone rang. A still-teary Ilene informed me that it was Dick O’Connor, Vice Chairman of Campbell-Ewald on the phone. “Hey Tommy,” he said. This was not a good beginning. “Boy, did we screw up on this one. A great example of the right hand not knowing what the left hand was doing. Tom, we want you back here in Detroit.  You’ll be working in the Chevrolet Merchandising Department here, handling, among other things, Sports Marketing for Chevy. You’re going to be a key member of our Chevy Account Team.” “But, Dick, what if I don’t want to come back to Detroit?” I asked naively. “That’s OK,” Dick said. “You can stay in LA if you want.  You just won’t have a job there. You do have one here.” “Oh, since you put it that way, I guess I’ll choose employment,” I said. I was still to come in for the Field Meeting to give my California Marketing Plan reports, which everyone always thought were inflammatory and “pro-import.” A few days later, when I stepped off of the elevator into the 4th floor Campbell-Ewald lobby, I saw the giant “Our Men In The Field” poster.  My picture had already been replaced with Bob’s.

Next:  They Take My Free Car!