The Las Vegas of 1974 bears little resemblance to the Las Vegas of today. In 1974, there were still plenty of vacant lots along The Strip. You could walk out of the front door of Caesar’s Palace and see all the way to McCarran Airport.  You knew you were in the desert, because you could see it all around you.  I wasn’t complaining, though. For a Detroit boy still getting used to LA, Las Vegas was like visiting Fantasyland at Disneyland.  Las Vegas was a market that fell within the LA Chevy Zone territory. At the time, there were two Chevy dealers there.  I had asked the LA Zone if Hawaii was part of their territory.  That was a sore subject.  Someone at GM had decided that the Hawaii dealers should be handled by General Motors Oversees Operations…GMOO. For some reason, Hawaii was considered a non-US market. GMOO’s agency was McCann-Erickson…they called on Hawaii.  No problem! LA, San Diego, Palm Springs, and Las Vegas were all mine!!

Every year, the National Automobile Dealers Association holds a convention. Dealers representing all manufacturers, and from every part of the country meet to visit the trade show, go to “make meetings” where thy got to yell at car company management, and are wined and dined by these same manufacturers. This year, the convention was going to be in Las Vegas.  At the time, it was the second largest convention to be held in Vegas. Most manufacturers were large enough to take over an entire hotel.  Chevy had taken over Caesar’s Palace. You knew it was the Chevy hotel by the huge banner hanging on the side of the building, and the three new Chevrolet models they had parked in the fountain.  For those of you who have never been, attending an NADA convention is like going to a four-day Black Sabbath concert where everyone there is much richer than you will ever be, and if you fall

asleep, you might get killed.  In an attempt to appease both God and Mammon that year, the featured speakers at the convention were Bishop Fulton J. Sheen, who had a down-to-earth religious show on the old Dumont Network in the 50s, and Harry James, trumpeter and big band leader from he 40s. He had been married to Betty Grable.  I don’t think they were old drinking buddies.

I was sent there to “work.”  Wink, wink.  One of my tasks was to help with the entertainment at the big receptions Chevy put on for their dealers; one on Saturday night, one on Sunday night.  Saturday’s guest entertainer was Glen

Campbell.  Chevy flew him in on a private jet, kept the jet’s engine’s running while they whisked him to the grand ballroom at Caesar’s Palace, brought him up on stage, pointed him toward the audience, then whisked him back to the airport after his 40 minute set was over. My job was to make sure the ballroom doors were closed during the performance, lest some wondering Ford dealers try to see a free show.  Sunday night’s entertainment was the Johnny Mann Stand Up and Cheer group. I guess Chevy was still buying its way out of the syndicated TV mess. At the entrance door both nights were a Zone rep, and someone from the hotel.  They each held counters to tally the number of people who came in. I was told that every person walking through the door cost Chevy $45, the per head price for unlimited booze, giant shrimp, baby lamb chops, gourmet cheese, and fettuccine with a mystery white sauce. Twenty-four hundred people the first night, seventeen hundred the second.  Once the shows had ended, I was on my own. Unfortunately, at my tender age, I didn’t know about all the fantastic parties the magazines put on during NADA.  These will be discussed more intimately in future posts.

After filling my pockets with giant shrimp and cheeses, and carrying two giant Jack Daniels roadies, I left the relative sanity of the ballroom, and began my descent into the mailström. My eyes and tender nature were not prepared for what I beheld as I entered the casino. Hundreds of rich millionaires were participating in the tribal rite of those with too much money.  Heads thrown back, they laughed at their good fortune, or perhaps, the

gas brought on by the mystery white sauce. Cigar smoke made the casino look like LA during a Level 3 Smog Alert. A very corpulent middle-aged dealer was staggering his way down an aisle of blackjack tables. Clutching tightly to his arm was his niece. I guess she was poor, because it was obvious that she couldn’t afford any underwear.  The tables were all packed.  The dealer stopped at an empty table and inquired why nobody was there.  “Sir, this is a $1000 minimum bet table.”  The Chevy dealer took the bait.  “C’mon, Honey, I’m going to show you how real men gamble. I’m going to bet a wad on one hand. He reached into his pants and pulled out an envelope.  In it was $15,000. He put it on the table.  The dealer counted it and said, “Change for $15,000.”  A pit boss, who looked eerily like Abe Vigoda, came over, looked at the money, looked at the dealer and his niece, and nodded to the blackjack dealer. The blackjack dealer counted out, and then pushed a stack of chips resembling the Chicago skyline to the dealer.  The dealer pushed the 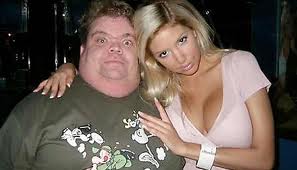 chips back on the “Bet” mark on the table.  By now, a crowd had gathered, like hyenas to an injured zebra colt. Everyone was cheering the man on. The blackjack dealer shuffled the cards and held out the green “cut” card. “Go ahead baby, you’re my lucky charm tonight.” The black jack dealer threw two cards to the Chevy dealer, and two cards to himself. The house showed a queen of spades up. The dealer slowly rolled the edges of his two cards  up.  A queen of clubs, and a two of diamonds! “Farg!” he shouted. He didn’t really say farg.  Beads of sweat began to form on his forehead. Maybe betting $15,000 on one hand wasn’t such a great idea. He briefly wondered to himself if Caesar’s Palace allowed “Hey, on second thought, I’ll just take my money and go to my room” Probably not. His corpulent hand made a fluttering motion over his cards. “Sir, you want another card?” the blackjack dealer asked. “Yes,” the man croaked. It came floating off the top of the shoe and landed in front of the man. A king of hearts. The house’s hole card was a seven of spades. BUST!!!!

Silence enveloped everyone within 30 feet of the table. The Chevy dealer just stared straight ahead. His niece slowly extricated her arm from his and slipped away to find a new uncle. The hyenas had caught scent of a new tragedy. Two dealers were skinny dipping in the fountain. They headed for the entrance. I went back to my room and emptied my pants of shrimp and cheese. Something told me not to touch any of it.

The next morning, as I checked out, I noticed the Stand Up and Cheer folks arguing with the front desk. Apparently the Amex card of their road manager had bounced. The hotel wasn’t allowing them to leave until their $4300 bill had been paid. Hmmm.  I’m here to help the entertainment,  I’ll see what I can do. Suddenly feeling an urge to, at least partially, emulate the poor Chevy dealer of the previous evening, I stepped to the head of the line. “What seems to be the problem?” I said. “They won’t let us check out,” the singers said in unison. “No problem,” I said, “I’m with Chevy’s ad agency and I’ll help you out.” I pulled out my brand new Amex card and tossed it to the desk clerk. He ran it. I waited. Would I “Bust?” Suddenly, he smiled.  “Thank you Mr. Cavanagh, it’s been accepted. They’re free to leave now.” I was crushed by slaps on the back and hugs from well-scrubbed American youth.  The road manager gave me his card. “Send us the bill at our production office and we’ll cut a check for you.”  I did.  They did…eight weeks later.  Amex was not happy with me. I was starting to lose interest in Las Vegas.

One thought on “I Visit Sin City”